Today marks the 18th year that the Rondo Hatton Classic Horror award has been bestowed upon many of the writers, producers, artists, podcasters and bloggers who work within the classic horror genre.

Having myself been involved for over ten years as a writer and editor in the genre. And having spent many hours reading, watching and writing about classic horror and monsters. It’s a fun profession where I’d made almost no money. Though I’ve found my fortune in making some great friends in the way of writers, podcasters and artists. Some of who have become life long friends.

These fellow monster kids have been generous to a fault. They have shared content with me for my blog freely. They have openly given me their own work in the way of art, photos and words, both written and audio. All of these gifts adorn pages of this blog.  And the fact is that my monster kid contributors are “in my opinion”, the backbone of the genre. They are the people who when they were kids,  rushed home to the TV set to watch their favorite horror hosts in the evening, and they spent their Saturdays reading monster magazines. And they grew up to be talented people.

I kinda felt like a kid waiting for the news of the 2020 Rondo winners to come out this year. I was extra excited to see the news, because this blog had been nominated for a Rondo. I also knew quite a few people who were also nominated this year.  I had great hopes that one of us would win a Rondo, or at least be a runner up in the classic horror genre award.

Upon waking up at 4:30 AM, I immediately jumped on my cell phone to check out the results. Shockingly, the two first winners, both in movie categories (movie and made for TV) were the Joker and Star Wars The Mandalorian. This shook me up a bit, because, for one thing, neither production had anything to do with the classic horror genre.

As I looked down the long list of winners and honorable mentions, it became clear to me that many of the winners were from segments of the genre that were on a higher tier or cast, than many of the other nominees.  This trend however, was not new news to me whatsoever. And was in fact the catalyst for the creation of our own Monsters After Midnight Classic Monsters Awards in October of 2019, which we hope to continue with in 2020.  As I observed the Rondos over the last few years, I noticed a trend towards awarding well funded productions, highly popular websites, more recognized writers and popular artists. 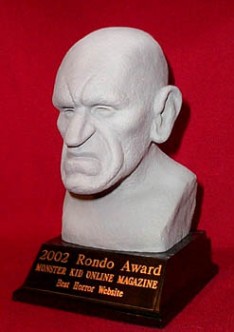 The Rondo Hatton award on the left, portrays a stern face proud man, the Picture of Rondo Hatton on the right reminds me that some bold and brave figures are often forgotten. I’m pleased that he was granted the honor of being the face of such a coveted  award.

While there’s nothing wrong with these practices, and the awards are given out based upon votes received from fans, I cant but help feel that many of the monster kids who dedicate their life to the genre are out gunned in a big way by others such as horror host Svengoolie, or movies like the Joker who are well paid, at the top of their game and have hundreds of thousands of followers. For instance, Svengoolie has been the only winner in the Horror host category for many years now. That leaves other lesser horror hosts, (and there are quite a few in other cities and online) artists, writers, producers and podcasters without a chance to ever see a Rondo sitting on the fireplace mantle in their own castle. Considering this trend, I can’t but help wonder if the Rondos should add additional tiers to their awards lineup to include the worker-bees of the classic horror genre.